What is Specific Gravity?

For the purpose of Gems float level products, specific gravity (or SG) is the density of another substance or object in relation to water at 4°C (39.2°F) in atmospheric pressure (14.7 PSI sea level). It is also referred to as relative density.

The SG of water under these conditions is 1.0

The specific gravity value of an object can be used to determine approximately where the object will float at the surface of the liquid. The SG is a percentage of an object’s volume that will be below the surface, and the remaining percentage is visible above.

For instance, Gems magnetic float part number 60241 with a specific gravity of 0.54 will have about 54% of the float below the surface of the water while 46% will be visible above (~ 9/16” submergence). 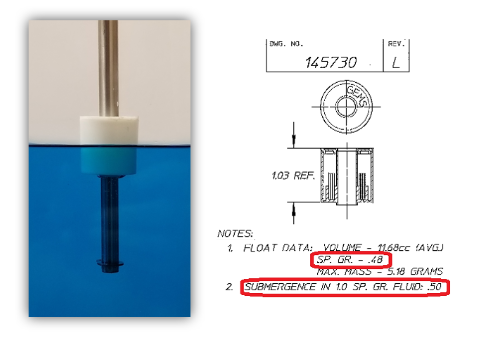 That is why anything with SG over 1.0 sinks. 100% of the object will be below the surface of the water.

Dissimilar non-soluble liquids also use SG to determine which liquid rises to the top. Pump gas/fuel and many motor oils range from appx 0.72 – 0.96, so they would rise above while the water would sink below. This is why Gems can offer interface level floats to monitor the level of one liquid over another based on the SG of those liquids.

Changes in temperature and/or pressure will affect the SG of liquids. For water, the hotter it gets the less dense it becomes, and adversely denser as it gets colder. However, the difference is minimal within the acceptable operating temperatures and pressures for Gems float sensors. Water SG is appx 0.91 at 300°F.

What about SG for liquids other than water? Quite simply, the same equation used for water applies to any other liquid to determine where the object or substance will rest.

For example, gasoline has SG of about 0.72 (that can vary). Using the stainless-steel float 60241 shown above, we can determine where that float will be in relation to the surface.

The most relevant information derived from this is that the float level sensor will indeed work in this application. For that reason, Gems catalog and instruction data includes the minimum allowable SG of the liquid used for any float. These values cover media temperature and pressure range as well as ± accuracy/repeatability to insure consistent operation. Please note this is NOT the SG of the float itself, but the minimum SG for the liquid used in the application.

For the purpose of Gems float level products, specific gravity (or SG) is the density of another substance or object in relation to water at 4°C (39.2°F) in atmospheric pressure (14.7 PSI sea level).
Gems Sensors & Controls