How to Calculate Radar Beam Width

Radar’s Measuring Principle:  Radar technology works by sending out short microwave signals toward the liquid via the sensor.  The microwave signal hits the liquid surface and bounces back toward the sensor.  The sensor utilizes the time-of-flight principle which uses the known speed of the microwave, and the time it took for the signal to return, divided by two (since it had to travel down to the liquid and then back up to the sensor) to determine the distance between the liquid level and the sensor.  Since most level is based on the height of the liquid, not the height of the non-liquid (air), the air height is subtracted from the total tank depth to determine the liquid level!

Gems non-contact radar sensor has a beam angle of 8 degrees.  The further away from the sensor head, the greater the beam width.  Picture a flashlight beam against a wall, as you move the flashlight away from the wall the beam width will grow!  Based on the 8-degree beam angle you can calculate the width of the beam at certain tank depths, or distances away from the sensor head.  However, if you’re like most folks and don’t quite recall Middle School Trigonometry and SOH CAH TOA rules, we’ve done the math for you!

If you enjoy Trigonometry, below is the calculation to determine your beam width. 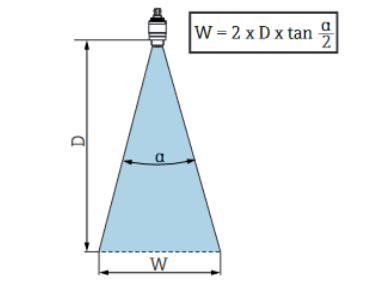 See below chart for beam width per sensing depth away from the sensor head. 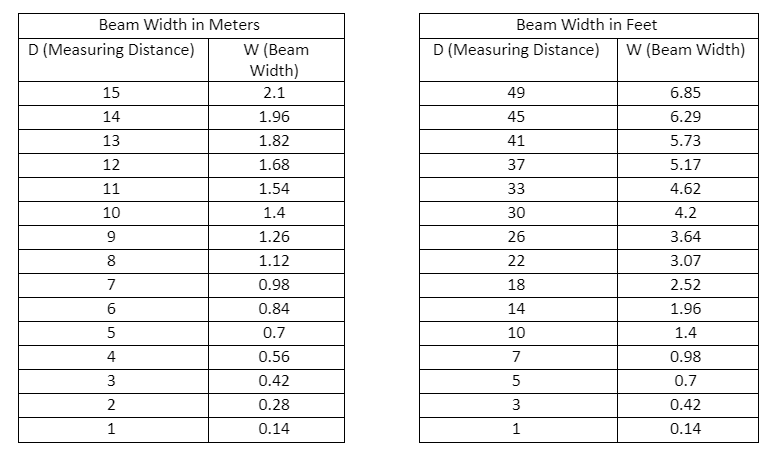