How does a float switch work?

When it comes to measuring liquid levels in tanks, few instruments are as reliable as the float switch. So what is a float switch? These handy devices can help measure metrics such as presence of absence of liquids in a tank, vessel, or container with dependable accuracy.

It’s important to know that all float switches aren’t created the same. There are many different varieties available depending on how you intend to use them. Still, the basic principle of operation for most float switches remains consistent: opening and closing as the liquid level in an object rises or falls. 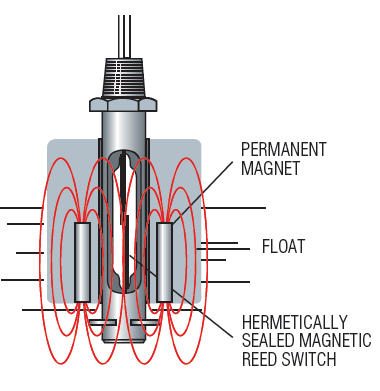 Reed float switches are commonly set as either normally open dry or normally closed dry. As the float on the normally open witches rises with liquid level, the magnets pull the blades of the reed switch together completing the circuit, allowing power to flow to any attached electronics. With normally closed float switches the reed switch opens up as the float and magnets rise with liquid level, breaking the electrical circuit.

Choosing the type of float switch you want takes some consideration. Low voltage float switch? High temperature float switch? Of course, what liquid you’ll hoping to measure with the float switch also matters. If you’re working with a liquid that is prone to gather deposits, whether it’s lime or calcium, for instance, they can eventually build up to a point that causes float switch failure.

First, though, you’ll need to determine the specifics of your float switch installation, or how you want it to be physically configured, for instance, whether that’s vertically or horizontally. How float switches are mounted makes a big difference in how they operate and interact with liquid. While the simple premise of operation is the same—rising or falling liquid results in a magnetic field, moving into the areas of a reed switch and sparking its activation— the variations between a horizontal float switch and a vertical float switch are worth nothing.

In terms of durability, magnetic reed switches are known to be reliable for years of trouble-free use. Should a customer need a specialized float switch, however, there are several different ways to customize a switch depending on preference. For instance, custom float level switches can be configured with up to seven different switch levels, depending on the series type.

If you’re in need of a float switch, have questions about float switch installation options, float switch wiring, an adjustable float switch, or any thing else, one of the best ways to get started is to contact the experts at Gems. We can help you determine the best type of float switch or switches depending on the situation.

When it comes to measuring liquid levels in tanks, few instruments are as reliable as the float switch. So how does a float switch work?
Gems Sensors & Controls