The 2200/2600 series pressure sensors are considered for most applications.  You reach for that one first as the standard model.

The 1200/1600 Heavy Duty series is considered when you are using the sensors in water and hydraulic applications where the sensor will see lots of spikes in (over) pressure.  A spike is when pressure accelerates very quickly in the system and momentarily goes beyond the working pressure.

Some examples of over-pressure can occur in pumping systems that are handling large volumes of water.  As water moves around the system and hits valves or ends of the pipe, a phenomenon called water hammer occurs.   These large impact situations create spikes in the fluidic system and can over-pressure and damage the sensors.  With the 1200/1600’s thicker diaphragm, the water hammer is absorbed and does not damage the sensor.

How does Gems make the Heavy-Duty Versions? 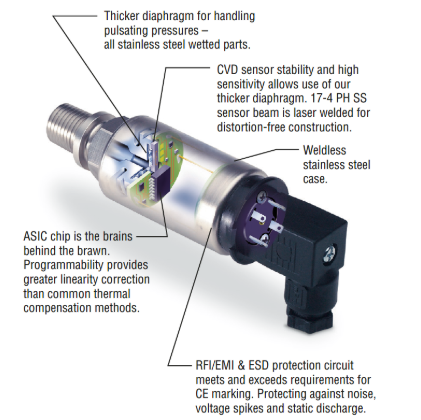 Definition:  The maximum pressure that can be applied to a pressure sensor without causing mechanical degradation or shift in output.  For example:  a 1-5V output sensor becomes a 2-6V output sensor after being exposed to a large pressure spike.

Definition:  The value of error of how closely a pressure sensor can send an output with respect to the actual pressure in the system being measured.

Gems Sensors offers their CVD based pressure sensors in two flavors: the standard 2200/2600 and the heavy duty 1200/1600.
Gems Sensors & Controls